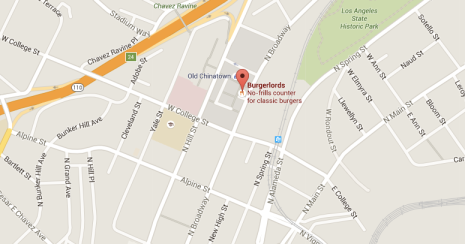 Los Angeles is beautiful because no matter how well you know her, she keeps changing on you in subtle, unknowable ways. Just when I think I’ve got her figured out, I stop and look in time to see the sun hit her in a slightly different way. The only constant in my relationship with this town is that I love it. The reasons why I love it, though, like me, are always changing.

I could go into a big long thing about it, but that’s kind of what love is, isn’t it? Watching someone change – and changing yourself – but staying connected? Because eventually you learn to think of change not as the disappearance of the old, but the discovery of something new. And that’s how, after years and decades of marriage, people wake up together just as fiercely in love as they were on the morning after their wedding.

Or something. Gracious, don’t take my word for it; I know way more about burgers than love.

Here’s my point. My favorite thing about this project is that, no matter how exhaustively I research, no matter how much I think I know, there’s always a surprise just around the corner. A comment made in passing by an acquaintance. An almost-hidden spot that makes me double take (and maybe almost rear-end someone) driving down Broadway. A recommendation from someone I’d written off as a dilettante. A remark from someone who’s just trying to revive a conversation.

Two weeks ago, I didn’t know Burgerlords existed, even though it’s practically in my back yard. Now, I’m sitting here with the empty box in front of me, the wrapping still soggy with thousand islands, the fast fading smell of the best french fries I’ve ever eaten and a truly remarkable burger lingering like a cloud above my coffee table, writing about it. God, I love this city.

Here’s all you need to know by way of background: Burgerlords is the brainchild of the actual children of Andre Guerrero, who you know because he’s the guy behind the Oinkster. It used to be the name of an insanely popular Tumblr run by the same dudes. Now, it’s a restaurant hidden in a corner of Chinatown where it would never occur to you to head for food. Which is unfortunate for you. That’s why you read this, though.

The Burger
I’ll spare you the suspense. I know I haven’t eaten every burger in Los Angeles. But none of the ones I have eaten can beat this one. I won’t belabor that point too much. Instead, I’ll get to brass tacks.

This burger is quite obviously an homage to the Double-Double. And yes, living up to that progenitor is an audacious goal.

Obviously, this is a much smaller operation than In-N-Out. The Guerrero brothers have not proven that they can maintain quality in the face of expansion. But they have expressed no intention or ambition to expand. For now, Burgerlords is just a window in Chinatown that you can’t see from the street. When you go – and you must go – resist the temptation to try and see the future through that window. Instead, try and appreciate what’s in front of you. The burger being made with love, care, and respect. The sizzle and hiss of beef on burner. The crackle of frying potatoes. Focus on what’s there. It’s more than enough.

The patties are grass-fed beef. They call it their “tri-blend” without further elaboration. None is necessary. It has the hardiness of chuck, the sweet tenderness of short rib, and insinuates (without achieving, but come on, the thing is ten bucks) the complexity of Wagyu. It’s seasoned to utter perfection, with the seasoning bringing out the natural savor of the meat, amplifying rather than masking.

The bun is the most overt tip of the cap to In-N-Out. It matches its ancestor in spongy sweetness, and is the perfect bookend to this burger. The toppings are the weakest point; the lettuce is a little sad and wilted, the tomatoes are a bit watery. These are minor nits. The onions and cheese fare better, offering a personality and tastefully assertive flavor to contrast the anchoring umami undertones of the patty. The thousand island is the subtlest you’ll likely taste on a burger, but is the perfect, cooling counterpart to the beef and cheese.

As I read over the last couple paragraphs, which I’ve written and re-written, they don’t get the point across. It occurs to me now that there really is no getting the point across. These ingredients coalesce into something much more than the aggregation of their individual tastes. Just like a symphony is more than a bunch of instruments being played at the same time. There’s nothing special about this burger. But that’s what makes it so special.

There’s a line in 500 Days of Summer where one of the characters describes the girl of his dreams, and enumerates the many ways in which she is different from his girlfriend. Then he pauses, and says, “But Robin is better than the girl of my dreams – she’s real.”

I thought of that line while I was eating this burger. I could dream up an insane burger. One with foie gras, a bone marrow drip, St. Andre cheese, avocado, bacon, or any other number of exotic or indulgent ingredients. But dreams are dreams; they don’t necessarily reflect anything that would work in the waking world. Burgerlords hasn’t made the burger of my dreams. They’ve done something better. They’ve made what is to date the best burger I’ve ever had.

Burgerlords might not be good enough to make you fall in love with Los Angeles. It might not make you fall in love with burgers. (Although, if you didn’t love either of those two things, it’s not clear why you’re here reading this in the first instance.) But for those of us who already love either or both of those things, it’s a pretty damn good reminder of why.

If we’re being honest with ourselves, this saga could only have started here. Since taking Baldwin Park by storm in 1948, In-N-Out has become a staple of life in California. Over the years, it has achieved nationwide fame, even being the subject of an extended, gushing soliloquy by a starstruck Anthony Bourdain. In-N-Out Burger is what most people in Los Angeles think of when they hear the word hamburger. The Los Angeles burger scene started at In-N-Out Burger. It is only fitting, then, that the Los Angeles Burger Project starts there as well.

The Burger
What can I write that most of you don’t already know? In-N-Out has mastered the art of the burger, and executes fresh (never frozen), impossibly consistent masterpieces thousands of times daily. The strength of this burger is in its simplicity. The cheese is melted and gooey without being messy. Wonderfully fresh and crisp lettuce and onions give the burger textural complexity. The lettuce is especially praiseworthy: never wilted, in spite of its proximity to freshly-grilled meat and melted cheese. The spread is tangy without being overpowering.

You could make a pretty strong case that the bun is the strongest element of the burger. Perfectly sized, perfectly absorbent, perfectly toasted, this bun has just enough independent flavor to influence the taste profile of the burger without dominating it. While many gourmet burgers feature a buttery brioche, In-N-Out’s bun is more traditional, but perfectly suited to the fresh simplicity of the offering.

Ultimately though, the meat is the marquee feature. The immaculately seasoned patties are juicy and perfectly cooked – just far enough past medium rare to preserve the meat’s natural flavor and juiciness, while also avoiding being messy or bloody (though, if you prefer a bit more blood and a bit less structure, you are free to request that the meat be medium rare). Notes of crackling fried mustard lingers under the delicate char. The thin patties provide a greater seasoned surface area, which gives the meat much more depth of flavor than a brutish, thick patty might.

In-N-Out is perhaps most impressive, though, for its consistency. This is a restaurant that has never compromised on its core values of making fresh, delicious food. Their commitment is evident in their consistently delicious and perfectly prepared burgers. Pull up to an In-N-Out Burger in the middle of nowhere, and you can be damn certain that you will get the same phenomenal product you would get from them in the heart of Los Angeles.

In-N-Out is not the place to go if you are looking for an inventive, boundary-pushing burger. Their menu is small, their ingredients limited, and their focus narrow. They make no effort to reinvent the wheel. They have a winning formula, and they stick to it. The food here will not challenge you. It will not surprise you. But it is also much more than just a known quantity. In-N-Out never wanted to redefine the burger. They just wanted to master it. And that, they have achieved in spades.