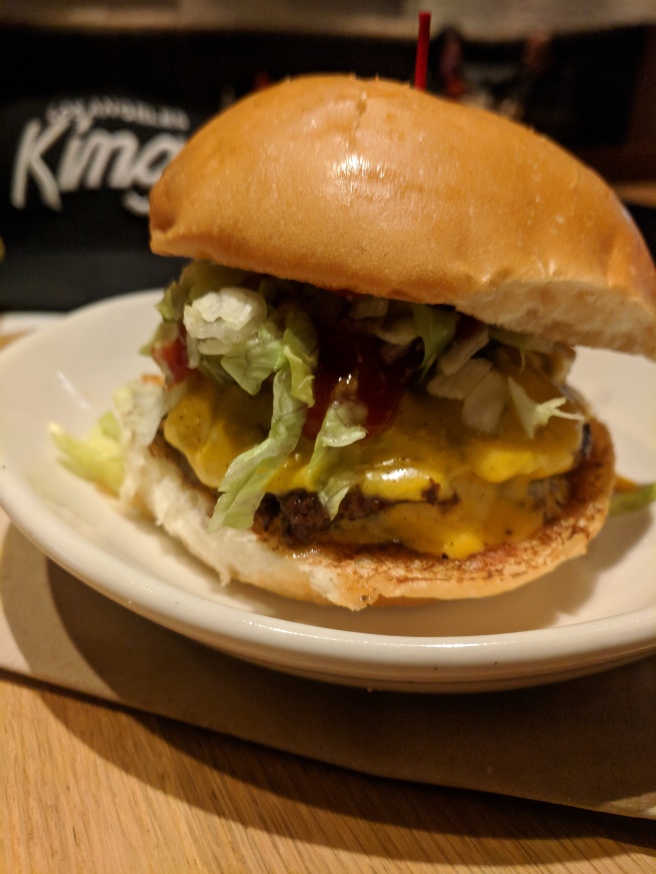 I know.  It’s been a while.  The last article I started to write for this Project was in October.  I remember the exact day; it was immediately after Justin Turner did this.  I tried to put my feelings into words that night, to no avail.  I got swept up in the frenzy of October baseball.  The hope.  I fell in love with the possibility that 2017 might just be the Dodgers’ year.

And then this happened.

And now this is happening.

And if that wasn’t enough, there’s this.

All of which has made me feel approximately like this.

Now, I’m not saying the serial and crushing failure of Dodger baseball and the casual, inevitable hopelessness of Kings hockey are the most pressing problems of our time. Surely neither is.  But they sure can take it out of you.  I guess my point is, it can be exhausting to love something.  I’m not sure it explains my silence here.  Maybe nothing can.  Maybe an explanation isn’t necessary.

Whatever it was that took me away from this, though, one simple idea brought me back: life is too short not to seize the things that bring you joy and keep them close.

That was probably too heavy for a blog about cheeseburgers.  But it was a couple weeks ago, spending a night at HiHo Cheeseburger with my better half (of whom I haven’t been seeing enough lately) that it hit me.  It’s good to be with people you love doing things you love.  So I’m back to say a few words about HiHo Cheeseburger.  With a little good-natured pedantry on the front end.

The Burger
I’ve eaten some great burgers in the past few months.  I resolve to write about all of them in turn.  But it took something like HiHo Cheeseburger to bring me back.

When you think and write about cheeseburgers, you’re often faced with dishes that are presented as elevated iterations of a classic form.  Los Angeles as a food scene is obsessively colloquial.  The culinary consciousness here is not, by and large, predisposed to traditionalist haute cuisine.  Rather, it is about cultural reflection, comfort, familiarity.  The food in this town is an expressive modality, a way for chefs to give you a window through which you can see who they are and where they come from, not merely what they can do.

It may sound a little high-brow, but it’s really the opposite.  Food in Los Angeles is a way for chefs to connect with the rest of us.  You’re not going to get a glimpse into a fancy culinary school; you’re meant to get a glimpse into someone’s childhood dining room.  What makes food here truly exceptional (rather than just some cute nostalgic exercise) is that those classic dishes are re-imagined with beautiful, leveled-up ingredients.

To wit, all the patties at HiHo Cheeseburger are 100% grass-fed Wagyu beef from First Light collective–sustainably raised, totally free of all hormones, antibiotics, and GMOs.  Laugh all you want at how cartoonishly L.A. that is; it tastes better.  The beef elevates what fundamentally is an unabashed photocopy of a Double-Double (right down to the mustard grilling of the patties) to something memorable.  The quality of the meat makes up for the slightly less-inspired seasoning on the patty.

Other elements of the Double-Double are referenced obliquely, for better and worse. The piquant onion jam admirably replaces the animal style minced onions and Thousand Island.  The brioche bun is a step down from its sponge analogue, though it’s tough to take serious issue with it.  The pickles, made in house, are exceptional: sweet, sharp, and snappy but also, delightfully, a hair thicker than you might expect, nicely rounding out the homage to the Baldwin Park O.G.

Regular readers will know I have no issue with people riffing on In-N-Out, especially if it’s done well.  HiHo Cheeseburger riffs on In-N-Out quite well.  And at $6.95, it’s an extremely high value proposition: you’ll have ample room in your wallet to give the Straus milkshakes or the banana cream pie a spin (and wash it down with a beer if you’re trying to drown your latest Los Angeles sports-induced sorrow).

HiHo doesn’t seek to elevate the concept of the cheeseburger.  Just the execution.  And in doing so, it embodies a lot of what is great about food in Los Angeles: it takes an iconic dish and pays respectful homage to it.  If you’re like me, eating here will remind you of why you love living here.  In spite of the Dodgers. 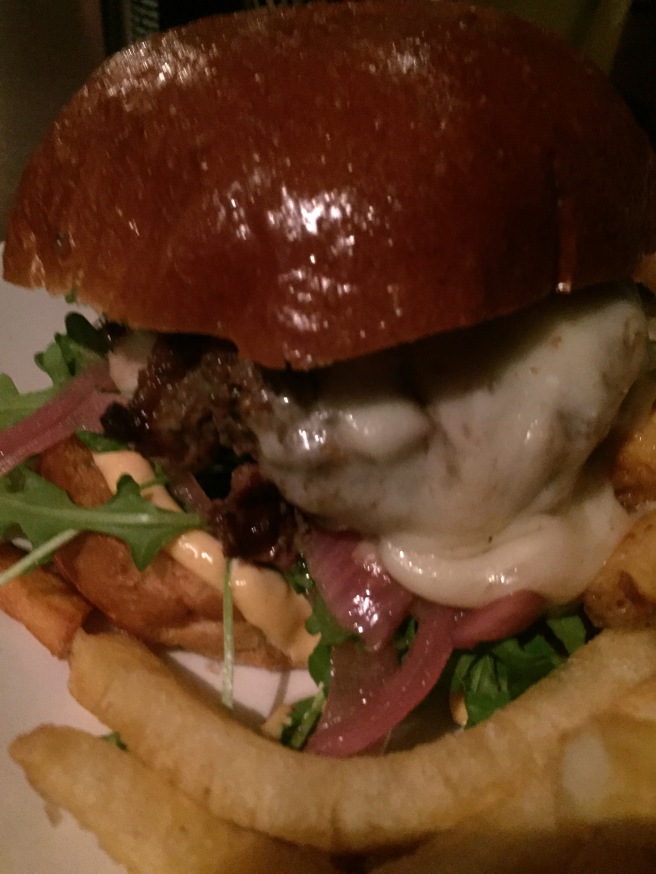 It feels like October has been all about the Chicago Cubs and their date with destiny.  They’re the latest beneficiary (see also 2004 Red Sox, 2010 Giants, 1998 Jay-Z) of the special treatment we give to baseball teams that are awful for long enough.  After over a century of losing, the Cubs – finally – are good.  And like the Red Sox, the Giants, and Jay-Z before them, the entire nation (but for we select few who don’t share the impulse for alacritous bandwagoneering) will love them until they finally win.  Then we’ll revile them for doing the very thing we hoped they’d do all along.  To be a “lovable loser,” you have to keep losing.

I watched the final innings of Game 1 of the National League Championship Series at The York, which was a Highland Park mainstay long before Highland Park was cool.  It’s a vaulting industrial space, where Edison bulbs throw barely enough light on roughly erased chalkboards sporting the menu of the day, and onto the carmine bricks behind.  The one television is located inconveniently at the back end of the bar, obscured by something from almost any angle.  It was there that I watched Adrián González smack a game-tying single, and then shortly thereafter, Miguel Montero be spoon-fed a hanging slider with the bases loaded.

Much like the Cubs, the York has established itself as a good-natured neighborhood standard.  And much like the Cubs, it’s kind of hard to see what all the fuss is about.  Besides the cool (but imitable) vibe, the cocktails are weak, the food is fine, and the staff just mostly competent.  The clientele is a weird mashup of young fathers and old bachelors, thirty-somethings all.  It’s as if the York is the last place where those two demographics can meet and remember times not too many years ago, when their lives looked more alike.

Kristen, Tristan, Peter, Shahin, Kelsey and I took a trip to the York for dinner to catch the end of the baseball game before going to Creep LA, which – spoiler alert – was basically me paying $53.50 to be called “daddy” by an emo kid in lingerie and then locked in a closet the size of a moving box (with two other people, one of whom, blessedly, was Kelsey) by a small man in yoga pants.

The Burger
The York’s burger is served on Bread Bar brioche, a heavily marbled sirloin and chuck hybrid patty, rocket (which, more or less, is hipster for “arugula,” which, more or less, is douchebag for “bitter spinach”), harissa aioli (harissa being a North/West-African chili paste that you may have run into at Moun-Of-Tunis, Koutoubia, or a similar spot), and pickled onion.  And cheddar, obviously.

Just by reading that list of ingredients, you may have the impression that there’s a lot – potentially too much – going on here.  That was my concern going in, too.  Imagine my surprise, then, when the burger actually wound up being strangely tame on the palette.  There was no pinching bitterness from the flaccid arugula, no astringent sourness from the too-soupy onions, no blunted bite from the aioli.  Everything got mixed together, reduced into some tasteless primordial ooze, the culinary equivalent of Cage’s 4’33”.  And to top it all off, there wasn’t even the buttery, eggy, cloudlike sweetness you would expect from the brioche (though this had more to do with the fact that it tasted a day old than any fault of poor Bread Bar’s) it was crumbly and Gobi-dry.

And that’s a shame, considering the patty was quite well-conceived.  Heavily marbled and a well-executed medium rare (evenly rouge-hued and barely bloody), the flavor was rich, the texture hardy and coarse.  It was crisped on the outside, but retained its juiciness exceptionally well.  Just like Charlize Theron in The Devil’s Advocate, it deserved a better supporting cast (instead, we got Shouty Al and dead-eyes Keanu; I’ll leave it to you to decide whether that’s a metaphor or not).

Were I predisposed to being snarky, I’d say the good news is that the burger York was only the third-most unpleasant thing that happened to me that night.  But since I am miles above snark and the solicitation of cheap laughs, I’ll leave it at this: Notwithstanding all the neighborhood affection, all the history, all the prescient neo-industrial decor, the York’s burger left a bad taste in my mouth.  Maybe not quite as bitter and caustic as Miguel Montero left, not quite as parched and salty as being locked in that closet, but the fact that those three things are part of the same conversation probably tells you all you need to know.