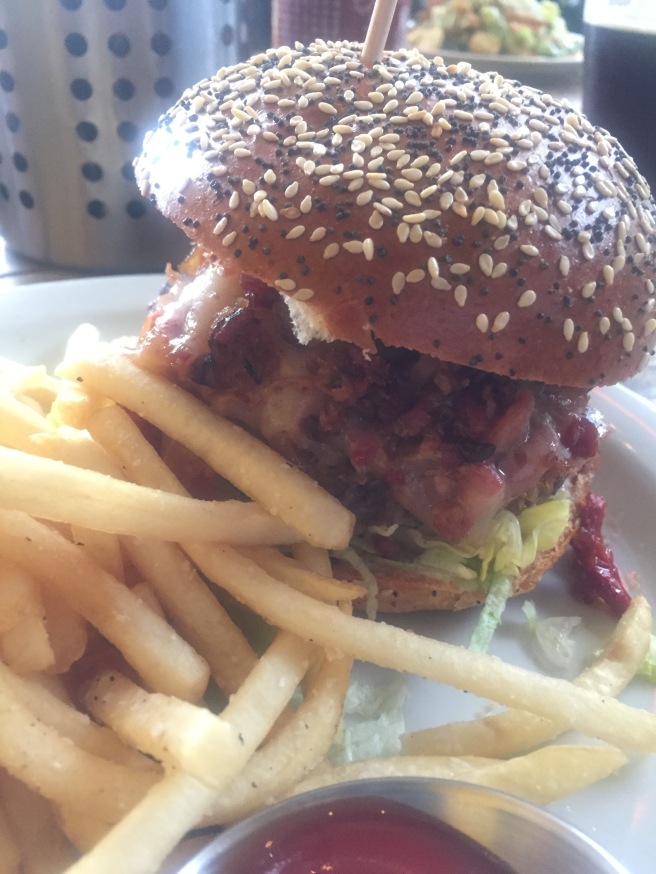 Nestled in the crook of the 134 and 5 freeways, maybe you saw the violent azure of the Golden Road Brewery, a cartoonish oasis in that weird part of town that’s not quite Glendale, not quite Burbank, not quite Atwater.  Maybe you heard about it after a Golden Road brewpub popped up at Grand Central Market or Dodger Stadium (thanks, Anheuser-Busch InBev).  Maybe you wanted to know whether Los Angeles actually does craft beer.  It really doesn’t matter much, once you’re here.

Maybe you lacked the foresight to take an Uber, in which case you’ll stubbornly scan the nearby streets for a (scarce) parking spot before wisely throwing in the towel and paying for the valet.  But what’s waiting for you in this Smurf-hued warehouse (next to two others – one red, one yellow) is one of the more singular spaces in the city.  A massive brewpub, serving close to two dozen beers, fully equipped with a (wood) ping-pong table and a (sheet metal) cornhole, Golden Road initially seems like something of an adult playground.

But then you’ll notice an area more closely resembling an actual playground, and you’ll see servers adeptly dodging the swerving, sprinting toddlers that abound in this place, roaming free as if in a Chuck-E-Cheese’s.  After a few minutes, you realize this is actually a family space, a place for a thirty-something to find echoes of a social life she thought she’d lost after getting a time-consuming job, setting down roots, paying a mortgage, and all that.  It’s a place to gather.  A place where buzzed fathers can play ping-pong with their kids.  It’s simultaneously heartwarming, disconcerting, charming, concerning, and profoundly odd.

After settling into the weirdness (or, depending on your proclivities, after a pint or two) you might notice the menu’s surprising bursts of sophistication.  One of the items featured is a burger, which bears the brewery’s name (albeit acronymally).  Sam, my guest of honor from Boston, his friend Brandon, Kelsey, and I went to try the burger (joined later by Nikhil the workaholic).  In a rare moment of social inhibition, I listened to Brandon criticize Dodger Stadium; but because we had just met, I refrained from releasing the full vitriolic flood of noble rage such heresy deserved.  Unsurprisingly, that choice has since left me in a fugue state perpetuated by paralytic, self-loathing regret.  It is, then, from the cusp of seething, shame-ravaged catatonia that I write this.  Brandon, if you’re reading, thanks a lot…and you’re welcome.

The Burger
The great thing about Golden Road beer, if you’ve not had it, is that it makes fresh presentations feel familiar.  Their Wolf Pup Session IPA – likely among the best session IPAs you’ll drink at the price point – is a playful, citrusy offering that embodies this interplay between familiar and challenging.  Tangy, sweet orange peel gives way to the crisp bitterness yielded by a litany of hops (the hard-charging bitterness of Simcoe providing a crackling backdrop for the complex acidity of Mosaic and a bunch of others that I don’t know nearly enough to name).

Anyway, the point here isn’t to showcase how little I know about beer.  It’s just to give you an idea of what Golden Road is all about.  Which brings us to the menu.  Fundamentally, this is bar food.  Pretzels, garlic fries, chips and guacamole, artichoke dip, and steak sandwiches are unsurprising fare to find on offer at a brewery.  But  read through more carefully, and you might conclude that these standard offerings are really just culinary ballast on a menu, there to allow for bursts of quirkiness.  Idiosyncratic items like a burger with a beet-centric patty, fried avocado tacos, a salmon sandwich with ginger lime slaw, and pulled pork verde are among the expressions that evidence an experimental itch.

The burger reflects that.  The first item of interest is the patty.  A blend of short-rib and rib-eye cooked pink, it’s gorgeous, complex, marbled, sweet.  It melts as you chew it.  It is an attention-grabbing centerpiece.  It dominates the news cycle of every bite.  It is a stand-alone item, an estimable entree in itself.  Its complexity of flavor allows it to reach out and connect with every other ingredient, giving the burger a balanced coherence, where everything seems put in place to complement the patty.

The other ingredients are high-minded classics.  The bacon is hazily savory, with only faint smokiness; it plays predictably nicely with the smooth, ruddy aged cheddar.  Caramelized onions impart singed sweetness.  Sun-dried tomatoes work surprisingly well, giving each bite welcome textural subtlety and mellow ripeness.  The remoulade is distantly piquant, pleasant enough but not arresting.  The bun, a straightforward brioche bun dusted with sesame and poppy seeds, is a sweet bookend to it all, with the seeds offering a lingering, complicated nuttiness.

Golden Road’s heart venerates the classics, but presents them in a cerebral, updated fashion.  That’s a fitting duality for a place that seems designed to let people slipping into middle age relive their youth, and put away a few pints while pretending their metabolisms are what they’ve always been.  At the risk of getting too misty-eyed in our analysis, let’s be clear: this is bar food, and bar food is bar food.  So I would discourage getting your hopes too high.  But, for those whose relationship with day drinking is something akin to, “These days, I feel worse and know better,” a GRB Burger and a Wolf Pup or three marks a nice escape from the new normal. 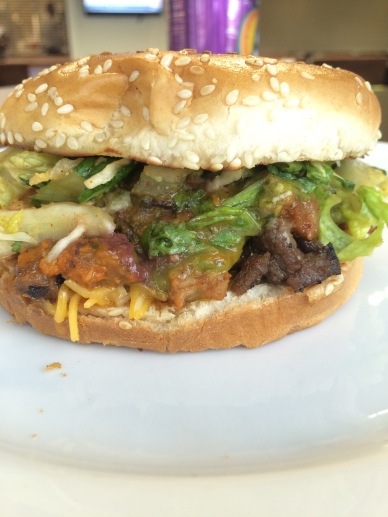 It’s hard to not love Roy Choi.  Kogi BBQ, his brainchild, set the stage for chefs to gain prominence without navigating venture capital weirdness (and the attendant sacrifices in culinary integrity) to secure the immense resources needed to open a brick and mortar restaurant.  Food trucks allow chefs to serve you the food they want to serve you, rather than having to spar with the deep pockets that keep the lights on.

From the trunk of a truck plastered with more stickers than a graying hippie’s Volkswagen, Roy Choi started slinging whatever the hell he wanted.  Most loved it.  Some didn’t.  But even his detractors will admit (some more grudgingly than others) that his food is — if nothing else — interesting, honest, and original.

Some complain that food trucks are like the Internet in that they remove the talent filter that previously existed in the culinary world, which (apparently) ensured a certain level of quality.  It was bad enough that any asshole with a laptop and a hunger pang can pretend to be a food critic.  Now we have to suffer dilettante chefs too?

On balance, though, that view is as wrong with respect to food as it is as applied to information.  It’s nice that food fell from the ivory tower and landed in a strip mall.  Sure, caveat emptor is a much more current creed now that there are literally thousands of places that no reputable outlet will have written about.  You’ve got to dig through a lot of trash to find treasure.  But that’s not such a bad thing; nothing worth having ever came easily.

I’m digressing.  This isn’t a meditation on the merits vel non of food trucks.  It’s about Kogi BBQ.  Roy Choi’s relentless creativity led him to expand the menu at Kogi (the kimchi quesadilla is a revelation, but also a full-frontal gastrointestinal assault).  Eventually, the menu expanded to include a burger, and my interest was piqued.  I went on a solo venture and checked it out.

The Burger
First things first.  Don’t call it a burger.

The Pacman Burger is named after Manny Pacquiao, and that’s fitting.  Manny Pacquiao doesn’t look like a boxer.  In fact, if I hadn’t seen him punch people in the face with such precision, skill, and dogged determination, I wouldn’t believe he was  a boxer just by looking at him (that might be racist and size-ist, but I’m a small brown man too, and nobody mistakes me for the second coming of Sugar Ray Leonard).

Similarly, the Pacman Burger isn’t really a burger at all.  It’s a self-styled “mashup,” a sandwich consisting of a gallimaufry of fiercely flavorful ingredients.  Front and center, a trio of meats: the outlet’s signature short rib, spicy pork, and spicy citrus chicken.  Rather than being alloyed and compressed into a patty, chunks of each meat sit nestled in a mélange of sauces (salsa roja, salsa verde, sesame mayo, and cilantro onion lime relish) along with cheese and chicharrones, all of this between two (sadly throwaway) sesame buns.

Each bite is a different experience.  The various components of the frenetic assortment of ingredients exist in different proportions throughout the sandwich.  Every square inch, then, features its own unique balance.  That keeps things interesting, but robs the burger of coherence.  It’s hard to come away with a strong impression about what you ate.

What’s more, these various ingredients don’t always balance one another well.  It’s like the Wild West.  The relish and the chicken duplicate the citrus, overloading the palate with acid when they are front and center.  The meats are all distinctive, but compete with one another.  The salsa roja and salsa verde are mostly redundant.  The jack and cheddar cheese mix would be a nice touch, but for the fact that any subtlety it might otherwise impart is impossible to discern in the gustatory monsoon.

Trying to isolate one of these ingredients and assess its impact on the burger is like trying to slow dance at a rave.  And maybe comparing this burger to a rave is apt: some will enjoy the frenzy and the disorientation.  Others will not be taken by the bright lights, loud noises, and disparate elements in close contact.  I wouldn’t say anything is out of place here.  It probably is closer to the mark to say that this burger lacks a sense of place altogether.

All of Choi’s passions collide in a messy, imperfect, chaotic, innovative, oppressively flavorful, challenging, and sometimes frustrating meal.  It really is a “mashup.”  It unites recognizable but arguably disparate and incompatible elements — each a technically worthy creation in its own respective right — and forces them to coexist.  It also forces us to accept that coexistence, even if it doesn’t align with our preferences.

It certainly isn’t arbitrary.  Like a mashup, there’s a harmony beneath all the noise, and it isn’t there by accident.  Even so, there are a few inconveniently inescapable facts about mashups.  First, sometimes the dissonance crowds out the harmony.  Second, sometimes the component parts get in each others’ way instead of working together to make something more.  And third, even if the synergy works, it doesn’t follow that the synthesis is better than its components were on their own.

In this case, the burger falls prey to those first two problems.  There’s just too much going on here to give the burger a consistent taste.  With so many ingredients filling the same role (three meats, four sauces, two cheese), none of them get a chance to interact meaningfully.  To paraphrase the bard, if the burger’s a stage and all the ingredients are merely players, then here, we have like more than one actor playing the same role, and everyone is screaming their lines at the same time.

That said, it isn’t surprising that Roy Choi would make a burger like this; it’s a giant middle finger in the face of convention, and it emanates from the same fundamental principles – truth, abundance, innovation, chaos – that make Kogi so successful.  Choi is, as always, selling what he wants to sell.  It’s less clear that what he’s selling is worth buying, but that’s our choice to make (I’d advise you to redirect your funds to Kogi’s other, worthier offerings), and I doubt he would have it any other way.